Delivery drivers dropped off more than 100 hot pizzas to warming centers across Vancouver, thanks to a local writer. 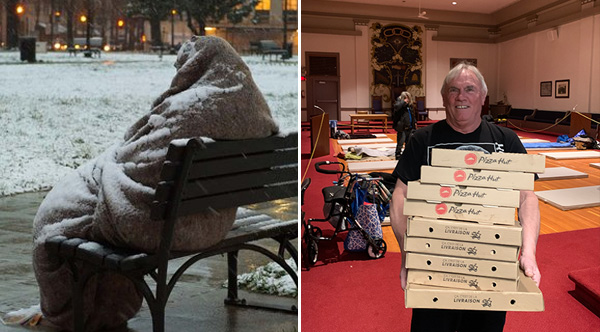 Helping the homeless in Vancouver

As temperatures dropped to -20 degrees this week in Vancouver, homeless guests filled warming centers across the city -- but these emergency centers generally do not offer meals to guests.

On Wednesday, Gabrielle Peters, a disabled writer and policy analyst in Vancouver, sent out a tweet asking for deals from pizza shops to help feed the homeless staying in warming centers.

"I knew that there was nothing there, really, for people to eat. There was coffee and tea and that was about it," Peters told CTV News. "I thought hey, what if we sent pizzas?"

.@cripcare1 has some funds and is going to send some pizzas to a couple of the warming centres tonight that don’t serve meals. I’m wondering which #yvr pizza place would like to give us the best deal for this? Please circulate to help find out.

That tweet received a boost from Mo Amir, host of "This is Vancolour" which brought in a steady stream of small donations.

Peters had suddenly raised more than $3,000, which was enough to provide pizzas to 15 different warming centers across the city.

Terribly cold -20 wind chill outside last night, but our full house of homeless visitors stayed warm in our hall and enjoyed a stack of pizzas donated by @mssinenomine last night. They were enjoyed by all our guests thank you! #oddfellows #homelessness #vancouver pic.twitter.com/8MxApJej2n

Since donations continued to come in the next day - including two donations of $500 a piece – Peters ended up having 57 more pies delivered to 10 locations on Thursday.

Peters said she could not have been happier with how the week unfolded.

"Community is a verb, not just a noun," she said. "It's the act of doing. It's being present and making things happen in whatever way you can."