Dog Reunited With Family 7 Days After Falling From Cliff

Luna, a mastiff-retriever cross, has been reunited with her owner after a heroic rescue last month. 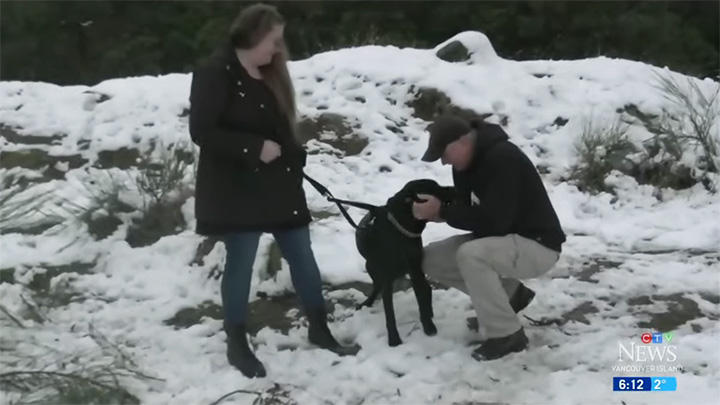 The mastiff-retriever cross was rescued from a Greater Victoria cliff after miraculously surviving 7 days while trapped alone on a narrow cliff ledge.

It's believed that Luna had chased an animal out of her yard and got lost, somehow falling off a cliff and landing on a two-foot wide ledge. She remained there, alone, as her owner and searchers frantically looked for her.

"It was terrible because it was getting colder and she always sleeps next to me or my daughter," said Saryta Schaerer, Luna's owner.

After she'd been missing for several days, there was a break in the case. Across the water, Ron Cheeke heard Luna's cries for help.

Cheeke recorded the sound and turned it into pet rescue group ROAM. He even went so far as to search the area on boat to try to locate the exact source of the sound.

"I used a pot and pan, and every time I banged on the pot and pan the dog barked back," Cheeke told CTV News.

Eventually, after searching on both water and land, a team found the scared dog and used a harness to pull her back to safety and to her owner.

Cheeke says his own dog had passed away recently and he was motivated to help.

"There's no feeling like it. When you're involved with this and you get the owner back with the pet, it's worth all the money in the world," added ROAM volunteer Andy Carswell.