A California teen drove to a woman's house to return a lost purse. 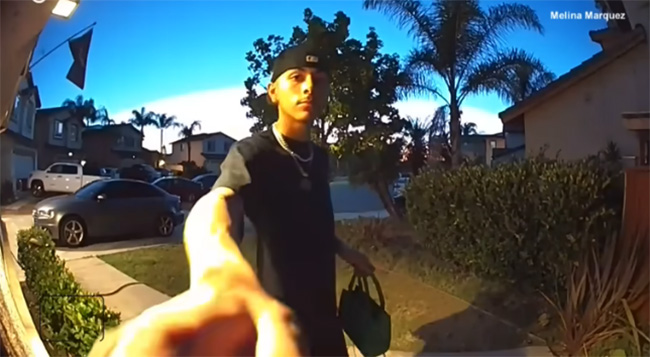 Adrian Rodriquez found the purse in a Ralphs in Chula Vista, CA.

Using the address on the driver's license inside the purse, Adrian drove to the house and knocked on the front door.

The purse belonged to Eliana Martin, a former roommate of Melina Marquez. Martin had not changed her address since her recent move, so the purse was brought to Marquez's home.

Marquez was not home when Adrian arrived. He left it with a relative at the house, and the interaction was captured on Marquez's Ring camera.

"I looked into the Ring camera, and I was like, 'Oh my God. He's such a young kid.' I was like, 'We need to find him and just give him a little piece of gratitude'," recalled Marquez.

She posted the video of Adrian on Facebook and the Chula Vista community quickly went to work.

The ladies invited him to Marquez's house so Martin could say thank you in person. They also launched a GoFundMe page in his honor.

"It feels good. I appreciate it. I really do, everything everybody's doing," Adrian told NBC News. "My mom always told me since I was little to always do the right thing when nobody's around."

"This is something that we really need. It's good news, positive news," smiled Melina Marquez.