In need of some encouragement?

Elementary school students in Healdsburg, California, are providing just that in recorded messages on a free telephone hotline. 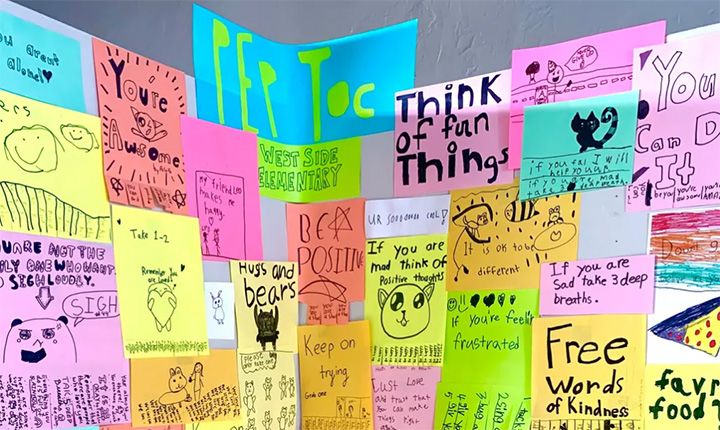 Peptoc is an art project created by teachers Asherah Weiss and Jessica Martin at West Side Union Grade School. Peptoc is how Martin's son, a first-grader at the school, spelled "pep talk".

The project consists of student-made motivational flyers, and a hotline with pre-recorded pep talks and life advice from kids aged 5-12.

"If you're feeling mad, frustrated or nervous, press one. If you need words of encouragement and life advice, press two. If you need a pep talk from kindergarteners, press three. If you need to hear kids laughing with delight, press four."

Since launching last month, the hotline has been receiving up to 9,000 calls per hour.

Martin said she had signed up for the cheapest hotline provider she could find, thinking the kids would be excited to hear 100 people had called in a month. "And then two days later, we're getting 500 an hour, and now we're getting 9,000 an hour."

Patients at Johns Hopkins medical center had been regularly calling the hotline. Rima Meechan, the school's principal and superintendent, heard from a woman with cancer who calls during her treatments. Weiss said she had seen the school's office manager in tears on the phone with the administrator of an Iowa elder care facility, where most patients are over 90 years old. "She was calling to thank all of the kids, because she played it for everyone who was part of that facility, and she said: ‘I haven't heard laughter like that from them in years.'"

Weiss and Martin say it's more than just the messages.

"Adults support children, but we don't really celebrate how much they support us," Martin said. "And to be able to be comforted by them gives us great hope that maybe we're all going to be okay."