A Pennsylvania teenager saved the lives of two boys who fell into a frozen lake. 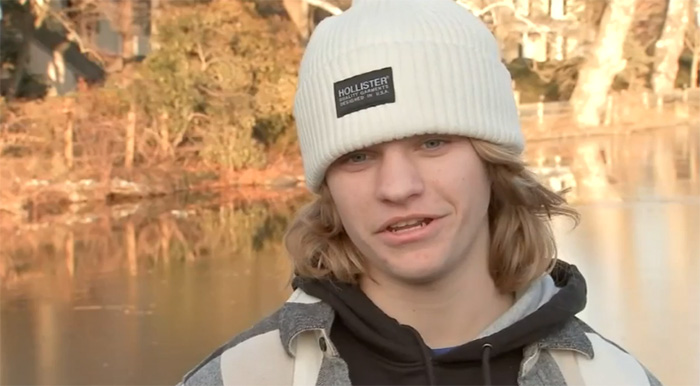 16-year-old Cory Hemberger was playing hockey on the frozen Lake Afton with his friend when he heard screams for help.

A 13-year-old male had fallen through the ice and his friend was trying to reach him.

"He was screaming for help. His friend tried to help him and he ended up going in with him," recalled Cory.

He rushed towards the two with his hockey stick.

"I was kind of just in the moment. My adrenaline was going. My heart was pumping, so I just went for it and just hoped God was with me," Cory told local news station WPVI.

Cory said he heard the ice cracking beneath him but was able to get the two boys out without falling in by using his hockey stick.

Cory's mother, Lisa Hemberger, didn't learn the extent of what had happened until the next day when she saw a post on Facebook.

She soon realized the message was posted by the mother of one of the boys that Cory had rescued. She reached out to the mother to say it was her son Cory who rescued the boys.

"She wanted to just thank me for his heroic efforts, and that her son's okay, and without Cory being there she doesn't know what would've happened," Lisa said.