Anthony Sheriff, also known as "Sheriff Drumman", has been performing mini concerts in Los Angeles from the back of his truck for years.

Last month, both his truck and drums were stolen from in front of his apartment in Hawthorne. 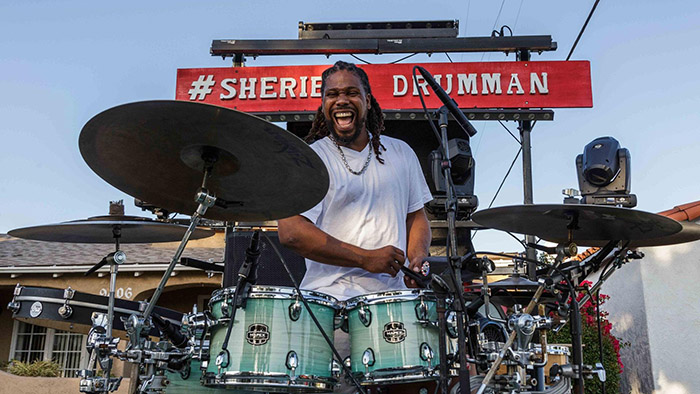 "When I got outside, I had a total panic attack," said Sheriff. "I fainted in front of my neighbors. I started screaming, I was calling for help like someone had shot me."

The 34-year-old put out a plea for help on social media.

A few days later, his truck turned up near train tracks on Slauson Avenue. But the drums were gone, along with his car battery, generator and lighting rig.

Metallica, a band that was formed in Los Angeles, heard what happened and surprised Sheriff Drumman with a brand new drum kit.

"Man, thank you guys so much," Sheriff said. "Thank you for taking the time and the resources to support and help what I do. I love you for that."

Metallica responded on Thursday with a tweet that read, "We're honored to be able to help out a fellow artist. Keep the music going, Sheriff Drumman!"

Sheriff says playing the drums is his therapy. For the last five years, he has utilized the streets of Los Angeles and the boulevards of Las Vegas as his open-air venues. He drives his truck around various areas of the city, playing impromptu pickup concerts that attract fans everywhere he goes.

During an interview last summer, Sheriff said, "I don't know what I'd do without my drums. I play the drums to keep myself balanced. I let the drums speak to my heart. It's like a therapy session. It keeps me alive."