Offshore Wind Turbines Have Become A Sanctuary For Marine Life

Two offshore wind turbines in the Atlantic Ocean have become a haven for marine life. 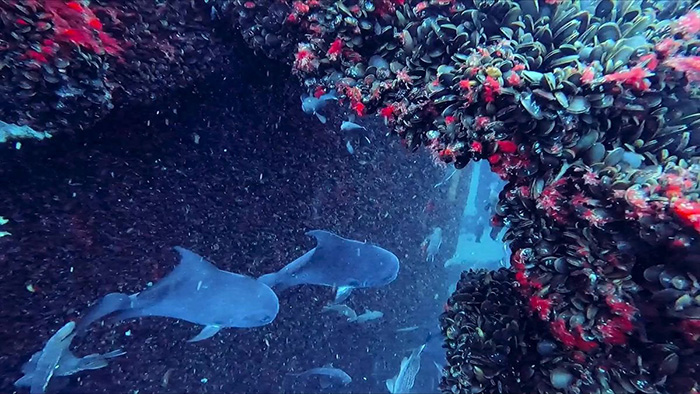 Dominion Energy has installed two offshore turbines, currently used for research only, about 27 miles off the coast of Virginia.

Surprisingly, the turbines are increasing local biodiversity by creating an ecosystem around the turbine footings.

"It's just amazing the fish ecosystem that is growing around those turbines," said Scott Lawton, an environmental technical adviser for Dominion.

The turbine's steel foundation stretches for about 120 feet underwater. Mussels, algae, mahi, seabass, baitfish and more circle the structure or set up shop directly on it.

Videos were taken about six months into the project, then again in September. The change in marine life was dramatic.

They're all "hanging out and feeding on what's growing on the turbines," said Mitchell Jabs, a Dominion environmental specialist.

This mirrors what happened off off the Scandinavian coast. Scientists watched underwater turbine foundations gradually transform into artificial reefs, attracting mollusks and small fish that feed on plankton, according to German news channel Deutsche Welle.

The effect went right up the food chain to larger fish, seals and dolphins.

Dominion plans to build another 180 turbines for a commercial wind farm by 2026. It first needs state and federal approval.