A heartwarming act of kindness by police officers in Victoria, Australia, was captured on camera after they stopped to speak to a homeless man outside of a grocery store. 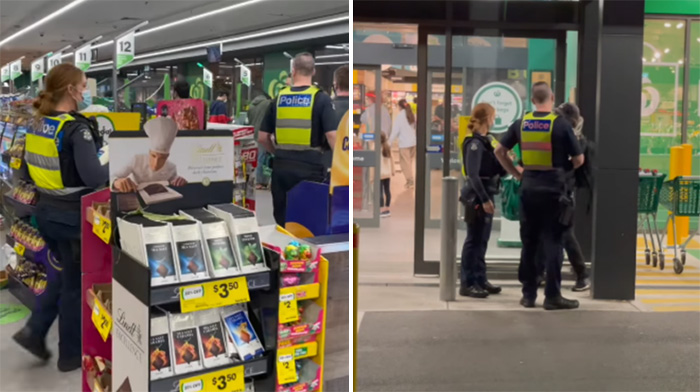 "It is cold tonight, I was rugged up as I walked through the car park of my local Woolies. A few steps ahead of me were 2 police officers heading straight for a homeless man sitting at the entry. He had a handwritten sign requesting spare change so he could get some food. It's not unusual to see someone less fortunate at the entry, it happens all the time, some times I throw in some spare change, but most times I'm guilty of walking past.

As the officers approached him, instead of saying 'time to move on' or 'you know you can't be here', one of them said 'What brings you out in the cold tonight mate?'

I heard him talk about being hungry and the iPads came out as they took details, and as I made my way through the automatic doors I could hear the officers say 'We just wanna make sure your OK mate?'

I went about shopping, grabbing nappies and food without giving it a second thought. I saw the 2 officers inside with a hot roast chook and some bread rolls and figured they were getting themselves late shift dinner. But then I noticed staples like rice and cereal and one of the said 'we probably need to get him some milk too.'

That is when it hit me. They were not shopping for themselves. We ended up at the checkout at the same time, they had split up and seem to do half the groceries each and both pulling out wallets/purses to pay half each. These 2 weren't rookies, they clearly knew the difference between a scammer and someone who was genuinely hungry.

As they went outside I overhead them check again that he had somewhere to stay tonight and then they handed him the bag of food with respect, compassion and kindness."