After hearing that Houston plumbers have been overwhelmed with service calls due to the winter freeze, a New Jersey plumber and his apprentice drove all the way to Texas to help out. 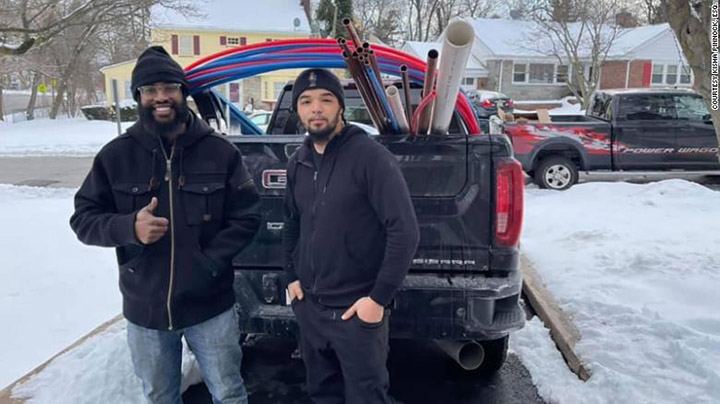 Andrew Mitchell is the owner of Mitchell's Plumbing & Heating in Morristown, New Jersey.

Mitchell and his wife, Kisha, drove more than 1,500 miles with their 2-year-old son after hearing that Houston homeowners had to wait weeks to book a plumber. Mitchell's apprentice Isaiah also went with them.

Before leaving New Jersey, they bought as many plumbing supplies as they could afford, because those items are currently hard to find in Texas.

On the drive down, Mitchell connected with local plumbing companies that were looking for help.

"By the time we got here there was already about four or five jobs lined up," Kisha told CNN. "Since we've been here, it has really been nonstop."

Frozen pipes have caused a lot of damage for Texas homeowners. Many residents have been without water for weeks.

"Due to the Texas inclement weather, this homeowner had frozen pipes and the pipes burst in at least 4 places," Mitchell wrote in a Facebook post. "The water leaks caused the ceiling to collapse. We came in and repaired the busted pipes within 30 minutes. Now this family can have running water after all this time."

Mitchell and his family planned to return to New Jersey next week, but now said they will stay for about two weeks because they've received so many calls from people who need their help.

"I think that we made a difference, for sure," Kisha said.