The 'World's Loneliest Elephant' Is Moving To A Sanctuary With Other Elephants, With Help From Cher

A lonely elephant at a zoo in Pakistan is finally moving to an animal sanctuary where he will be able to socialize with other elephants. 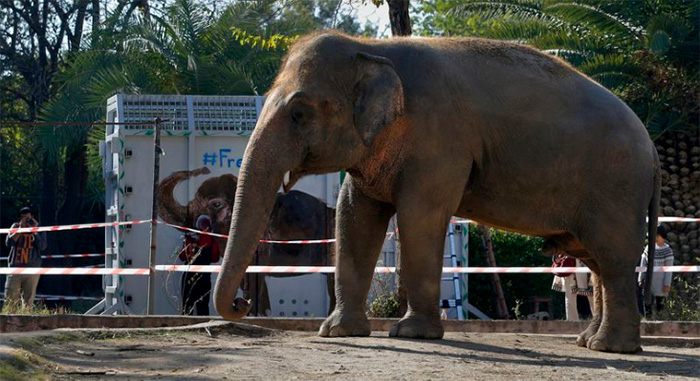 Kaavan the elephant was just a year old when he came to Pakistan's Marghazar Zoo in 1985 as a gift from Sri Lanka.

Kaavan had a partner elephant, Saheli, who lived with him from 1990 to 2012. When Sahel died, Kaavan "was heartbroken" and has been alone ever since.

Activists around the world have been campaigning for years for Kaavan's release -- including Cher.

On Friday, Cher wrote on Twitter that she met with Pakistani Prime Minister Imran Khan. 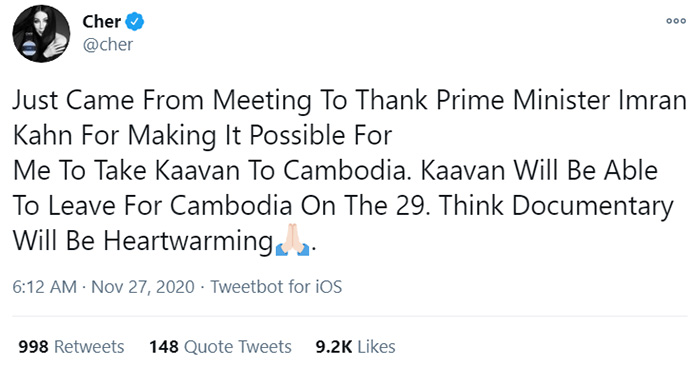 "The Prime Minister observed that it was indeed a happy moment for all of us that after giving joy and happiness to the people of Islamabad and Pakistan for about 35 years, Kaavan will now be able to retire with other elephants in a specialized sanctuary in Cambodia," Khan's office tweeted.

On Sunday, Kaavan will transfer to the Cambodia Wildlife Sanctuary where there are three female elephants to keep Kaavan company.

The 5-ton elephant will loaded into a specially built crate and onto a cargo plane.

"An elephant transfer by plane on this scale I think has never happened before, so we are writing history here," said Four Paws spokesperson Martin Bauer.

Bauer says the goal is to socialize Kaavan, which he believes will take time since he's been alone for many years.

"Ultimately the goal is to bring him together with other animals because that's what elephants want. They're herd animals, they always form families, and that's also what we plan for him," Bauer told NPR.