Chris Nikic has become the first person with Down syndrome to complete an Ironman triathlon. 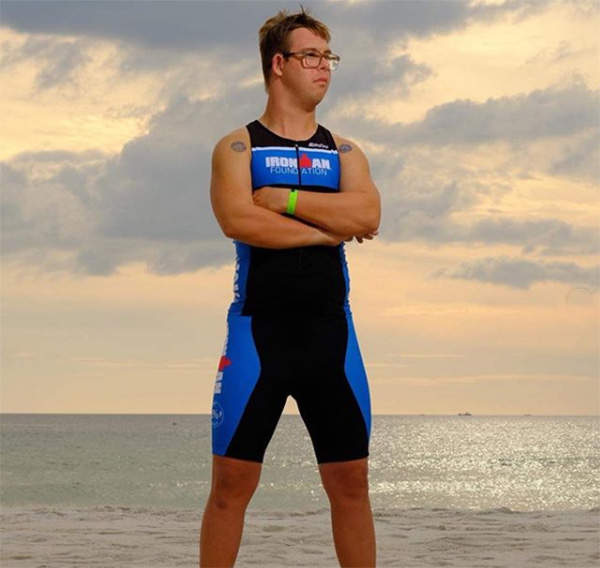 The 21-year-old from Maitland, Florida, has been overcoming obstacles his entire life.

Chris had open heart surgery at five months old. He was not able to walk until age 4 or eat solid foods until age 5. He had four major ear operations at age 17. And he struggles still, as a young adult, with balance, slow reaction time, and low muscle tone.

But when people tell Chris he can't do something, he simply says: "Watch me and I'm going to prove you wrong".

Last year, he started training for the Special Olympics triathlon and built up enough skill and endurance to do a 1,000-meter open-water lake swim.

"It was something we'd never imagined was even possible," Chris's father Nik told Runner's World.

But Chris wanted to be a world champion. After learning that no one with Down syndrome had ever completed an Ironman, Nik suggested to Chris that this was his opportunity.

In May, after months and months of training, Chris became the first person with Down syndrome to finish a half Ironman.

"Congratulations Chris on becoming the first person with Down syndrome to finish an IRONMAN. You have shattered barriers while proving without a doubt that Anything is Possible!" the Ironman organization wrote in an Instagram post.

.@ChrisNikic, YOU ARE AN IRONMAN! Congratulations Chris on becoming the first person with Down syndrome to finish an IRONMAN. You have shattered barriers while proving without a doubt that Anything is Possible! We are beyond inspired, and your accomplishment is a defining moment in IRONMAN history that can never be taken away from you. You swam 2.4 miles, biked 112 miles and ran 26.2 miles and now you get to brag for the rest of your life. The opportunities you have created for others around the world through this journey you embarked upon, is immeasurable. Thank you for allowing us to be a part of your remarkable life story and we can’t wait to see what you achieve next. The entire IRONMAN `Ohana #onepercentbetter #anythingispossible

Chris's triumphs so far, his coach and Special Olympics partner Dan Grieb says, are thanks to a simple yet powerful philosophy: Just get 1 percent better everyday.

"It's easy to be successful because I only need to get one percent better each day," Chris says. His 1 percent philosophy has proved so effective that he now gives motivational speeches on the topic.

As for Chris's future, he plans to continue to challenge himself with even bigger goals.

"Time to set a new and BIGGER Goal for 2021," he wrote on Instagram after finishing his first Ironman. "Whatever it is the strategy is the same. 1% Better every day. YES, I did the work but I had angels helping me. God surrounded me with Angels. Best part of all. New family and friends. All about awareness and inclusion. Awareness for Down Syndrome and Special Olympics. Inclusion for all of us with all of you."