Amazon Driver Delivers Package To Man With Cancer, Returns With Card And Flowers 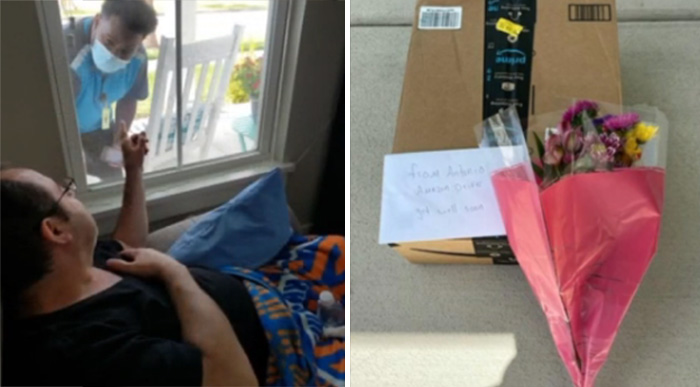 Carlos Pagan and his wife, Denise, have a sign posted on their door to let visitors know why they cannot answer the door. Pagan was diagnosed with blood cancer in March and is currently undergoing chemotherapy.

Their delivery driver, Antonio, read the note posted outside, left and returned later with another package: flowers and a card with a heartfelt message.

"It really, really touched me," Carlos told WCIV. "For him, especially after he had delivered our package to come back so he went out of his way to purchase the flowers and the card and bring it back to the house."

Antonio returned a week later to check in on Carlos. The two met through the window.

"He wasn't delivering any packages to us on Sunday, he just wanted to make sure whoever was undergoing the cancer treatment was okay," said Denise. "His eyes brightened up when he saw him, and he told him, 'I want you to know you're going to be okay and you're going to be walking soon'." 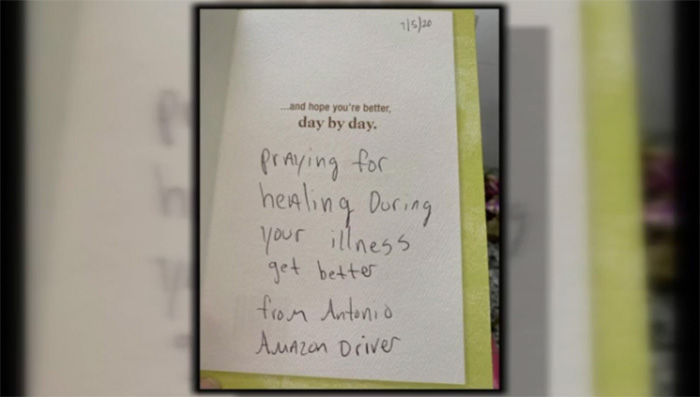 "I thanked him and told him it meant a lot to me and he just said he had to do something," Carlos said. "For someone that doesn't even know me, to come to my window and say, 'In a couple months, you're going to be okay, you're going to be up and walking,' it was just awesome what he did. What he did was absolutely awesome."