A group of strangers came together to rescue a dog in distress off a trail located on the Sandia Mountains near Albuquerque, New Mexico. 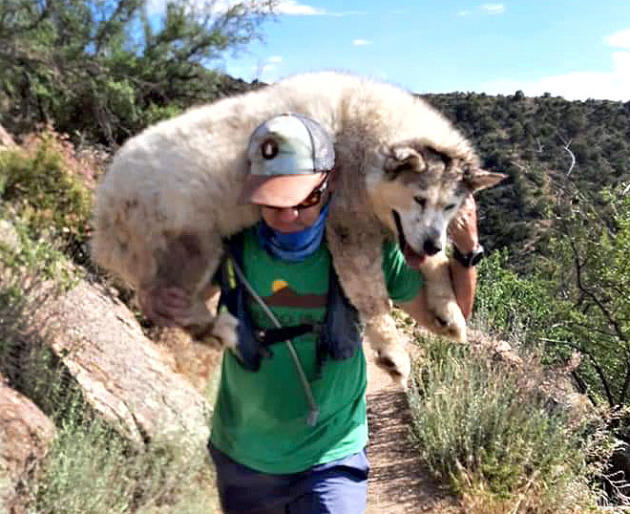 Cynthia Klaila had hiked five miles up La Luz Trail and was headed back down that afternoon when she heard the dog's cries.

"And then I saw her, this big fluffy white dog, down at the bottom of a ravine between the La Luz and Tramway trails," she told The Albuquerque Journal.

The massive dog, weighing between 80 and 100 pounds, was panting, shaking and lying on her side some 50 feet down a chasm ribbed with boulders, prickly pear cactus and brush.

With no one else in sight, Klaila knew it was up to her to scramble down the ravine to help the dog.

"I just knew I wasn't going to leave that dog to die alone," she said.

Klaila tried to call 911 and 311, but the calls wouldn't go through. She had finally connected a call to a neighbor, but just then the dog's owner arrived carrying a bucket and two jugs of water.

Klaila made her way back up to the trail to flag down help.

Jason Bousliman, 45, was halfway into his weekly run up the old part of La Luz when he saw Klaila jumping up and down and waving her arms.

"The owner did not speak English but was very concerned," Bousliman said. "This dog was everything to him, but I could tell it was dying. Not long to live. So I thought, we have to get this dog up somehow."

So, he picked up the dog and carried it back up to the trail.

"It was the most amazing thing," Klaila said. "It was like, 'Oh, I'll just carry this huge dog up this steep, rocky cliff, no problem'."

Bousliman struggled to haul the hefty dog down the trail, resting often.

About half a mile to the trailhead, a couple on vacation from Ft. Worth, Texas, joined in the rescue.

But trying to carry the dog with two people on a narrow trail turned out to be too difficult. So, Bousliman hoisted the dog onto his shoulders and carried her the rest of the way.

"Carrying Maya was about the hardest mile or so of my life but also the most rewarding," Bousliman, a marathon runner, said.

After about an hour, the rescue team finally made it to the trailhead.

"Everybody did their part," Klaila said. "It was like a little community of strangers coming together. You just want to cry."

Before entering her owner's truck, the dog wagged her tail and gave Bousliman a wet kiss.

"A group of strangers coming together to save the dog of someone they didn't know and who didn't speak English was exactly the bit of humanity I needed to be a part of this week," Bousliman said.