With high school proms cancelled across the country, John Krasinski hosted an online version for the class of 2020. 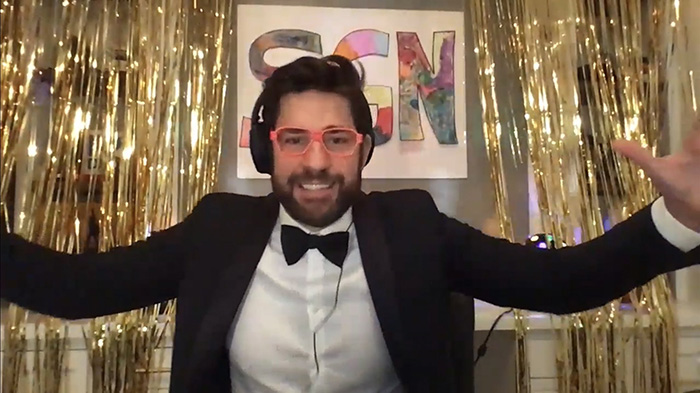 "I can't take it anymore how much you are all missing your prom," Krasinski said. "So let's do something about it!"

Eilish is actually a huge fan of "The Office," and even sampled a snippet of dialogue from the show for her song "My Strange Addiction."

"I absolutely adore you guys," Krasinski said to Billie and Finneas. "I've been a big fan of you since forever. The fact that you used 'The Office' in a song blew my brain out, and I don't think I fully recovered — ever."

Chance the Rapper and Krasinski's "The Office" co-star Rainn Wilson also made appearances on the live stream.

Throughout the night, high schoolers and their parents posted photos and videos to thank Krasinski for hosting such a wonderful prom night.

everyone say: thank you, john krasinski. he’s really out there doing the most and it’s so appreciated. #SGNProm pic.twitter.com/5SDzOjSPVW

thank you to @johnkrasinski for hosting the most amazing prom for our #ClassOf2020 ❤️ #SGNProm pic.twitter.com/kLQZ9BO250

Can I just say #SGNProm wasn’t just a “virtual prom” it was the ultimate display of love & kindness. Going live on YouTube...multiple celebrity guests, music videos, songs, all of it! It was risky, but it paid off with all the feels! 👏 Bravo @johnkrasinski 👏👏@somegoodnews

the crossover of the decade what is happening at #SGNProm pic.twitter.com/K09c0JbX3K

I’ve been really torn up about how senior year ended, but prom with my bestie on FaceTime, JOHN FREAKING KRASINSKI, AND my favorite artists @jonasbrothers AND @billieeilish was AMAZING. Literally the best prom ever. You are truly the best, @johnkrasinski. #SGNProm @somegoodnews❤️ pic.twitter.com/gUJdn00XKm

@johnkrasinski thank you for hosting prom, mine was canceled and my date and I dresses up a FaceTimed while watching and dancing. My mom even took social distancing prom photos for us #SGNProm pic.twitter.com/Ba89wfSpK5

As a teacher, I’m so thankful that this huge thing you did, a virtual prom for seniors of the 2020 class, touched so many students and their parents ❤️ pic.twitter.com/xUrhBDSs9b