YouTubers have met their goal of raising $20 million to help plant 20 million trees thanks to more than half a million donors. 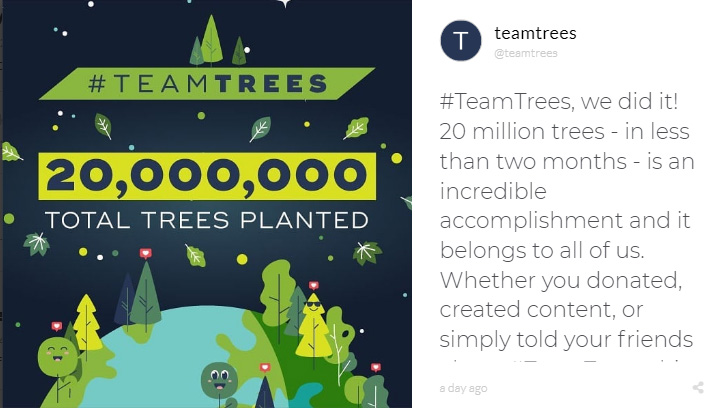 The initiative was started by popular YouTubers MrBeast and Mark Rober.

At $1 a tree, the cause's goal was ultimately to raise $20 million by January 1, 2020 to plant trees in partnership with the Arbor Day Foundation's reforestation program.

The organizers announced Thursday that the cause had already achieved its goal for the end of the year, raising money to plant 20 million trees in less than two months.

"We want to show that YouTube isn't just a drama fest," MrBeast said . "We actually have real influence and can make real change."

The Arbor Day Foundation plans to begin planting in January 2020 and end "no later than December 2022".

It is estimated that 20 million trees would take up 69 square miles of land, absorb around 1.6 million tons of carbon and remove 116,000 tons of chemical air pollution from the atmosphere.