When Home Insurance Wouldn't Help This Pregnant Mother, Her Community Stepped Up

A pregnant mother in Richmond, Va., is overjoyed with the love and support she has received from her community after thieves damaged her heating and air-conditioning system. 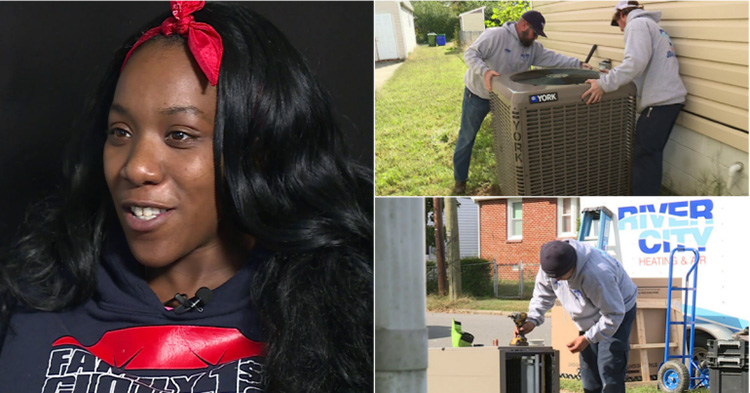 For months, Teresa Steele has been living with no air conditioning or heat after someone stole the copper from her property and broke her home's HVAC unit.

"I called insurance and they wouldn't cover it," Steele said. "It feels bad because this is how we live… They did it to take the copper and sell it for a few dollars. I don't have $6,000 to get a new system."

Steele needed to get her unit repaired in the next few weeks or she was going to lose her home owner's insurance. She was also worried that social services would take her baby from her if she brought a newborn home to a cold house.

And while she has reached out to various organizations for help, she had no luck.

So, she asked the CBS 6 Problem Solvers for help. After the local news station aired her story, Steele says her phone has been ringing off the hook.

"My phone's going crazy. People were sending me messages and saying stuff like, 'We're willing to help,'" Steele said. "And it was just bringing tears to my eyes."

She was still crying when River City Heating owner Bobby Robinson and his crew pulled up Thursday to fix her unit for free.

Robinson said his wife saw the story and urged him to help.

"What goes around comes around, so one day I might be in need of help and hopefully there will be help for me," Robinson said.

Her local energy company also pitched in to lighten her load by placing Steele on their "Energy Share" program which will reduce her monthly heating bill.

"You never know who's out there listening to you," Steele said. "You have to have faith... and have to believe that the more you spread your love, someone will have love to spread back to you."