Newlywed Woman In Her 90s Is Interviewed

There was a lady in her 90s who became a sort of local celebrity because she had recently gotten married. The local news station decided to interview her. The interviewer asked questions like how it was to be a newlywed in her 90s.

"This isn't my first husband, so it's not much different than the others," she replied with a smile.

"Oh? How many husbands have you had?" the interviewer inquired. "This one will be my fourth," she replied.

"What does your current husband do?"

The interviewer laughed and then asked how she came to marry these men from such different backgrounds and personalities.

"It always made sense to me," she replied. "I married one for the money, two for the show, three to get ready, and four to go." 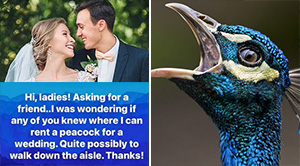 Bride Asks To Rent A Peacock For Her Wedding. The Responses Are Hilarious