Yesterday I was on the treadmill at Planet Fitness when a young guy got on next to me. He looked like a lot of guys there with many tattoos.

I smiled and it wasn't very long before we started to talk. I questioned him about his tattoos and he laughed when I said I bet I'm the only one here without one. I was curious how painful they were to get. He grinned and said it depended on where they were put. I told him I saw one I might like. It went alongside the foot and it would read, "Walk By Faith." He let me know that would be painful!

It wasn't long before we were talking about other things too. I inquired how long he had been a member of the gym. He shared he had been there a few years.

When our treadmill time was over I asked his name and I gave him a hug. Then Josh stated something that kinda surprised me. He said, "It was great talking with you. Do you know that you are the first person to talk with me here? Most people are intimidated by the way I look."

I made a new friend. I've learned a long time ago you can't judge a book by its cover. 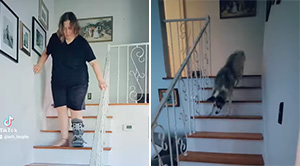