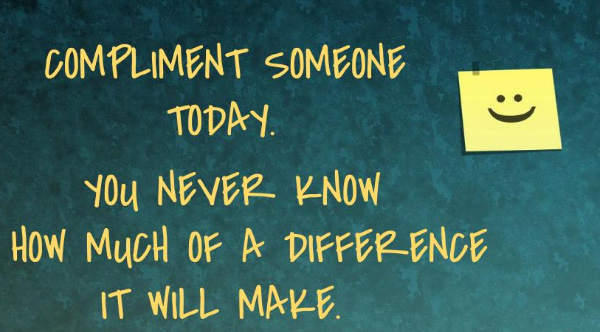 Some people are very lonely and a friendly conversation will literally make their day, even if it seems insignificant to you.

Here are some stories people shared about those little compliments that went a long way:

"I worked in a restaurant for a number of years and every Wednesday a family would come in with their adult special needs son. On his way in and out he would complement every person he saw on their shirt or their hair or shoes or smile. One of the few things I miss about that job."

"When I was in my 20s I was in the hospital for septic shock (blood poisoning). I was all alone late at night, feeling like literal death. I wasn't afraid I was going to die, but I was still scared and close to freaking out just from a combination of boredom, loneliness, pain, and just being creeped out by my body. The nurse came in to do the nightly rounds. You know how when someone does something so often that they get really efficient at it? Like a chef who can chop an onion in five seconds flat. No wasted motions. I'd been in the hospital a week, and all the nurses were like that. Half of them could take vitals, check the IV and all that without ever actually looking at me. Nurse lady does her thing, same as all the others. Then she did something special. She stopped, looked me in the eyes, and smiled. This was more than twenty-five years ago. Maybe she patted my arm and said a few words. I don't remember. I don't remember her name or what she looks like. But I remember that she took a few seconds to acknowledge me as a human being, and that it suddenly made the pain and fear and loneliness bearable again. Little gestures matter."

"At one of the lower parts of my life, after a long terrible day at work where I had a party of 25 just get up without paying, on top of a lot of other problems, I was seriously contemplating suicide that night. Before I left though I ran some food for another server to a table with a woman and her two young daughters. When I got to the table the youngest one, maybe 9, just exclaimed 'I like your beard!.' I don't know why, but that little compliment from that little girl completely changed everything, totally brightened up my day, and even now on bad days I think about what she said and how it made me feel. Since then I make an effort to always compliment people randomly. 'I like your smile, it just brightens my entire day!' goes a long, long way."

"In high school there was a teacher that everyone bullied. He was old maybe late 70s and he was strict but no one ever listened to him. I always had conversations with him about his day and all that and I listened to what he had to say. One day after one of his students stole his phone, I asked him why he worked in this job if no one treated him right, and he said to me, 'Because there's people like you Karen, who make my job worth it.' I don't know why but those words really touched me. Him and I weren't close but I treated him with respect. And I always acted like myself around him. So that compliment meant the world to me as much as it meant to him."

"Years ago,when I was very down on my luck--suffering from deep depression, taking several medications that made my hands shake -- I ran out of coffee. I had to go across the street to the only place near me that sold it: a discount store, somewhat below Wal-Mart. I was standing in a fairly long line (my hair not brushed, my coat over my pajamas) and the clerk was a miserable sourpuss who truly hated her job. She was super-fast though and was flying through the line, speaking only when necessary, not unlike the Soup Nazi. She was very dismissive to the customer ahead of me and was spoiling for a fight. I was determined that she was not going to treat me that way, I was already down as low as I could go. After she whipped my coffee can across the scanner and into a bag, I said to her: 'You know what?' No response, just a scowl and blazing eyes. 'You are the fastest cashier I've ever seen. You should be working at least at Safeway with union wages and benefits, you are wasting yourself here.' Her face was transformed by the most beautiful smile and she mouthed the words 'thank you.' I took my time walking away so I heard how cheerful and polite she was to the customer after me. That girl taught me that even at my lowest point, I still had something to offer that was valuable."