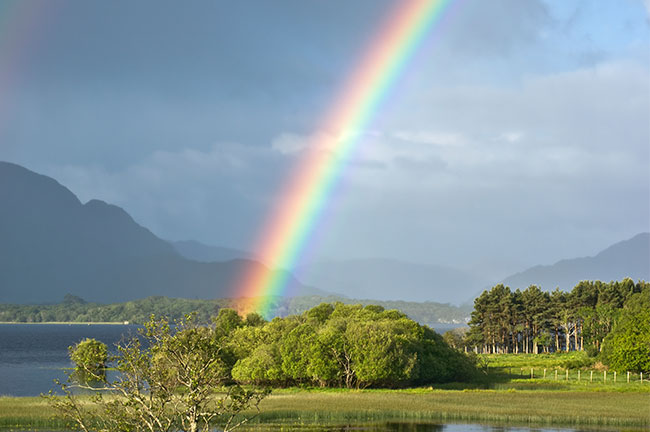 My daughter saw a colorful rainbow the other day after a thunderstorm. She called to me to look out the window and see it as well. Looking at it I was amazed at how its beauty could still uplift my middle-aged heart. As I gazed upon it, I also remembered one of the very first times I ever saw a rainbow as a boy.

I had been sitting in the house for an hour waiting impatiently for the rain to stop so I could go out and play. It had been pounding on the roof incessantly and I thought it would never end. When it finally did stop I raced outside and was greeted with the glorious sight of a rainbow curving across the sky. I had just recently heard the old legend of leprechauns hiding a pot of gold at the end of a rainbow. Excited, I looked to where the rainbow seemed to be touching the ground in the far distance. I started to quickly run down the railroad tracks near our house in search of that elusive treasure. The quicker I ran, though, the more the rainbow began to fade. Finally, I found myself running as fast as I possibly could, but it was too late. By the time I got there the rainbow and its pot of gold were gone.

Sadly that wasn't the last time I found myself chasing after false treasure. Over the years I ran after fame, success, money, and even relationships that I thought would bring me the happiness I always wanted. None of them did, however. It took me a long time to find the true treasure that doesn't rust, break, fade, or flee. That treasure is the love of God and it is free to all. I welcomed this treasure into my heart, soul, and life and shared it with others as well. The funny thing too was that the more love I gave away, the more love I had within me.

God loves you so much. He is forever ready to light up your life with the rainbow of His love. Accept His treasure with joy, share it with everyone, and grow richer everyday.