A man in Indiana is being hailed as a hero after saving four young children and their 18-year-old sister from a house fire. 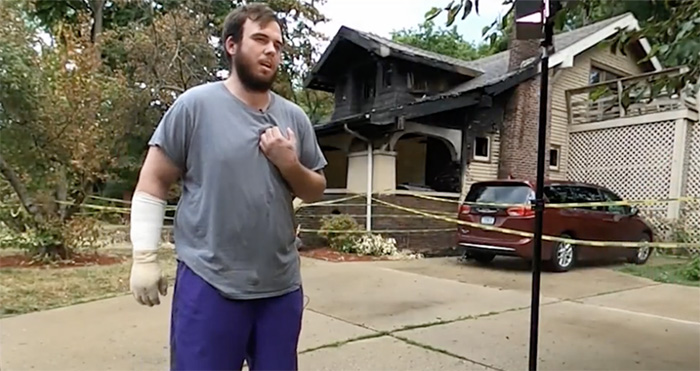 Nick Bostic said he driving home when he saw flames coming from a house around 12:30 a.m.

"I saw the fire on the balcony so I slammed on the brakes, pulled in the driveway, and ran into the house from the back. I was hollering 'Is there anybody in there?'" Bostic told Fox News.

He ran into the home and found four people. He helped get them to safety right away, but was then told one of the children was still missing.

Bostic rushed back in to the burning home.

"The smoke just came out of nowhere. It was pitch black, pitch black. The heat was excruciating," Bostic said.

Bostic was able to locate the child after he heard faint crying. He grabbed the child and jumped out of a second story window to avoid the flames.

"I grabbed her and held her snug and I ran up those stairs like a running back for the Colts. I jumped out that window," said Bostic.

All five members of the family were uninjured.

Bostic, 25, said he doesn't consider himself a hero and said he's just an ordinary person who did what he had to do.

Officer: "I know this is going to hurt, OK? But we're going to stop the bleeding."

Bostic: "Go for it." pic.twitter.com/JuZ5mfpIsU

"Waking up every morning I have something to remind me of why I'm here, still alive. Why God keeps me here," Bostic told News 18. "He used me like his instrument that night."

Bostic said he hopes to reunite with the family soon.