Freddie Freeman of The Atlanta Braves surprised a young Phillies fan with a signed baseball after the fan's act of kindness was captured on camera during a game in Atlanta. 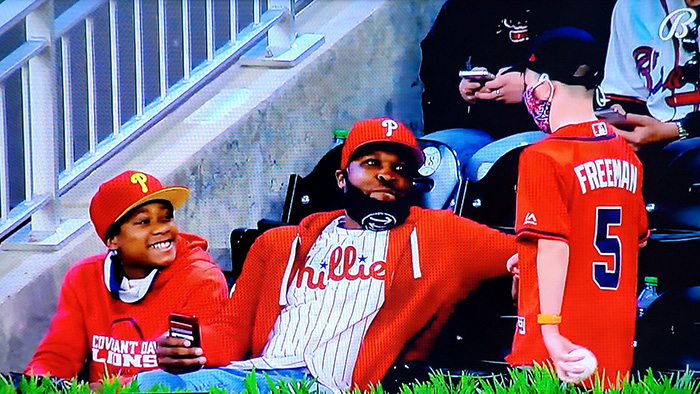 During the Phillies series-opening loss to the Braves on Friday night, a young Phillies fan came just inches away from catching Freddie Freeman's two-run home run. The ball fell down into the bullpen instead. After a few attempts to get it, the young fan finally wound up with the ball.

But the best part was yet to come.

Freddie Freeman hit a home run for the Brave’s and a father and son in Phillies gear retrieved it.

Then the son turned right around around and gave the ball to a young Brave’s fan.

The video (above) shows the Phillies fan give up the ball to a young Braves fan in a Freddie Freeman jersey.

But this heartwarming story does not end here.

The act of kindness by the Phillies fan also captured the eye of the guy who hit the home run.

A video shared by the Braves on Sunday shows the father and son once again in stands when up walks Freddie Freeman himself.

Freeman spoke to the young man and shook his hand, saying that he saw the video of that moment. He then gave the young fan a ball autographed by Bryce Harper and himself.

Friday: @iamjamesscott1 and his son Joshua gave their @FreddieFreeman5 home run ball to a Braves fan.

Tonight: Freddie surprised Joshua with a baseball autographed by both Freddie and @bryceharper3! pic.twitter.com/N9ciuOzHbq

According to MLB reporter Jon Heyman, the Phillies are also sending the boy some signed gear for being the best representation of a Phillies fan the team could ask for.