A respiratory therapist from Windsor, Ontario, was moved to tears by Canadian border officers after a long shift at a Detroit hospital. 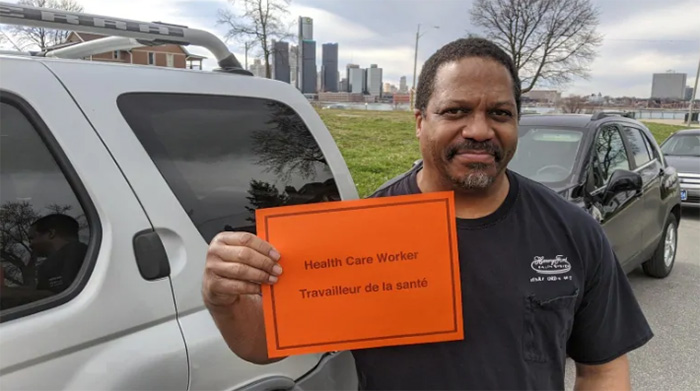 Jeffery Rowe was heading back into Canada on Saturday night after working a 12-hour hospital shift in Detroit, when he was stopped at the border for something very peculiar.

"I came through the tunnel, and there wasn't a lot of traffic, and when I went through the customs area, there was about two or three cars with their emergency lights on," Rowe told CBC. "I thought, 'Oh man, they're not going to let us back in the country' ... I was totally frightened."

Instead, he saw something that moved him to tears.

"There was about 20 custom officers, standing shoulder to shoulder with signs, welcoming back the Canadian health care workers that work in the States and they were shouting and cheering," said Rowe.

"I rolled down my window and gave them the thumbs up and said, 'You guys are awesome.' To see these guys jump up and big smiles, just crazy. It just went right to my heart. I was crying all the way home."

When he made it home, he could barely recall to his wife what had just happened.

"My knees got kind of rubbery I just went down onto my knees and explained to her what happened, we both just hugged each other and started crying," he said.

Rowe said he might not have realized the stress he's been under while doing his job, and the warm welcome home at the Canadian border was a "release" for him.