Two law enforcement officers in Brisbane, Australia are being praised for going above and beyond the call of duty for helping repair an elderly woman's front door in response to an attempted break-in at her home. 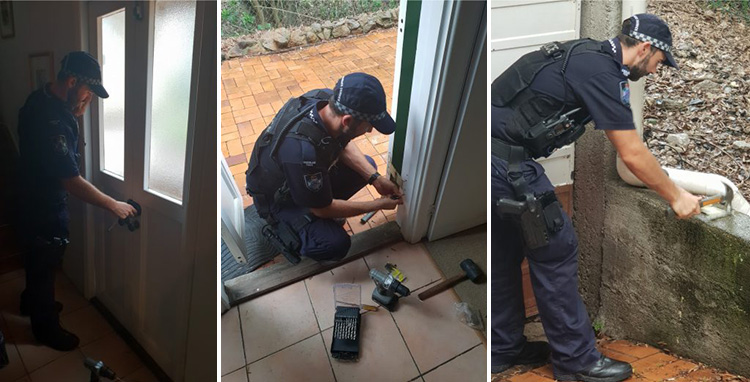 Constable Matt Boswell and Senior Constable Christopher Couch arrived at an elderly South Brisbane resident's home to find that the front door had been ripped off its hinges, leaving the resident unable to secure her home.

"It was clear the lady was very shaken from the ordeal," Constable Boswell said. "However, the first thing she said was 'Do you want a cup of tea?' That was very thoughtful."

The officers sat with the resident for a while, making conversation to put her at ease. They learned she was a recent widow and lived alone.

"We wanted to make her feel safe in her own home once again," Constable Boswell said.

So, the officers went to work on repairing her door.

"I went to work bending the hinges back and drilling new screw holes to re-hang the door on the door jamb," Constable Boswell said. "It was not a perfect by any means, but the door was locked and secured."

Before they left, the officers left a note for her handyman to assist with making her house even more secure.

"These small acts of care can make a big difference to people in our community, and the QPS is proud to have officers like Constable Boswell and Senior Constable Couch," the Queensland Police Service said.