A Family's Haunted Baby Carriage Sells On eBay For $710

A vintage baby carriage that a Mississippi family alleges caused paranormal activity inside of their home has sold on eBay for $710.

**If you're afraid of ghost stories, turn back now!** 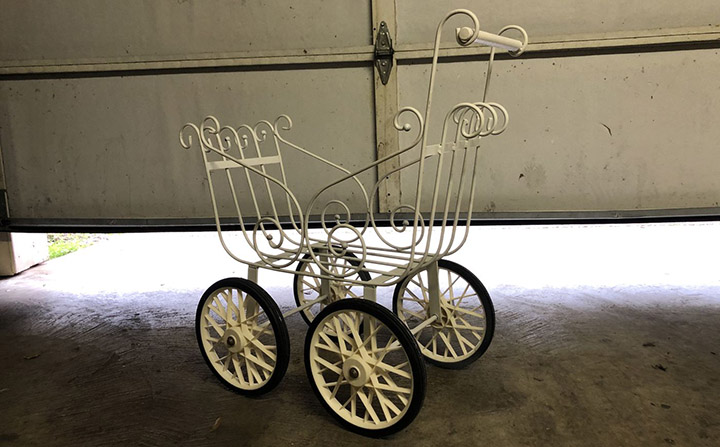 Whitney Merritt says she received the vintage doll carriage as a Christmas present last December. Her mother had gotten it from a friend of a friend and had gifted it to Whitney's daughter, where it sat by the Christmas tree for the first few days.

Then the knocking began.

They would hear it on the walls of their home which they have recently moved into. The sounds grew so loud that on two occasions, Whitney walked to the front door thinking someone was outside.

"And then about the third or fourth night was when we started hearing, like, boom, boom, boom, in the attic," she recalled.

But soon the sounds above their living room became so frequent that they could no longer be ignored. One night, Whitney's husband Michael went into the attic carrying a shotgun and a flashlight, expecting to find someone up there.

And so ended week one... but week two started with a bang.

It was around two or three in the morning when Whitney was awakened from what she calls a "dead sleep." The noise was so loud, she says, that she thought their dog had crashed through the window of their door.

In the morning she found a bag full of coffee mugs she had recently purchased from TJMaxx on the floor -- the mugs shattered into pieces.

Whitney claims the bag was three to four feet away from the table.

"There was no way that they could have fallen over at all," Whitney says adamantly. "I mean, they weren't on their side or anything… they're not just gonna roll. You know what I mean? They just don't roll."

The next night, another bang. It was around 3:30 in the morning. Whitney rushed into the kitchen to find another bag on the floor, inside another shattered mug.

After putting the glass in the trashcan, Whitney started walking back to her bedroom. That's when she said she heard the sound of someone dropping a load of silverware into the sink.

"I mean, I wasn't even back to the bedroom yet and that's when I turned around. I about broke my neck," she told WLBT. "And I went back to the sink to look and was like, 'Maybe something slipped and fell,' but I had just done the dishes. There was nothing in the sink. So I was freaked out… I stayed up for a while."

A few nights later Whitney and Michael were walking to their bedroom when the bathroom door slammed behind them.

At first they thought maybe one of their children had gone to use the bathroom, but the light never came on.

"So my husband opened up the door real quick and turned the light on and there was nothing in there," Whitney says. "And he stood there messing with the doors in the hallway for a minute just trying to find a logical explanation, like, maybe it was the suction that's slamming the door."

But the door never moved on its own again.

The next day the family was in the living room when one of their children's toy cars started playing music repeatedly. When they checked it, the toy's power switch was turned off.

Later that evening, Whitney went to wake up her husband for work. As he got ready, Whitney began to sweep the living room. As she swept, she saw her husband walk into the kitchen to fix himself some coffee. She says she asked him a question which he ignored so she asked it again. Still no answer. Frustrated, she walked into the kitchen but found no one there.

Whitney walked back into their bedroom to find her husband asleep.

"I saw him," Whitney said. "I saw— I swear on my kids and I'm not crazy. Please don't think I'm crazy. Cause repeating this to somebody, I know it sounds weird. Because I've never believed in any of that ever in my life. I'm not— But I saw a person walk past the door into the kitchen."

Then came the final straw.

Whitney had gone to the grocery store with her daughter. Her four-year-old was at their grandparents and her seven-year-old was at school. Her husband was the only one home.

Whitney said it was around 12:30 when he called her.

Whitney said no, that he was still at school.

He called Paxton's name five or six times, but there was no answer. That's when he got up and walked into his son's room. Paxton's bedroom light was on, his Xbox was on and a bottle of water was "actively" dripping on the floor.

After telling Whitney this story, they had a discussion about all of the strange occurrences at their home and when they had begun. "We were sitting here and [Michael] just fixated on that little baby carriage and we stuck it outside…"

Since then, everything has been normal. No more knocking, no more footsteps in the attic.

So, Whitney put the carriage up for sale on eBay, letting potential customers know it was "definitely haunted". 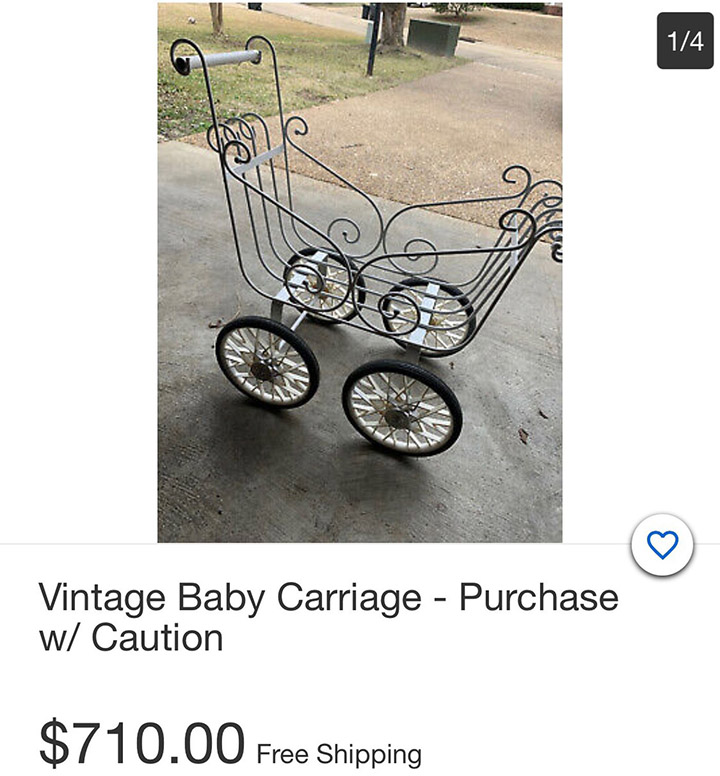 "We both strongly believe there is a spirit attached to that doll buggy," Michael told WLBT.

After about 50 bids the carriage was claimed by a Kansas woman fascinated by ghosts and spirts.

Whitney says she is glad to be departing with the carriage, adding that her husband is more relieved.